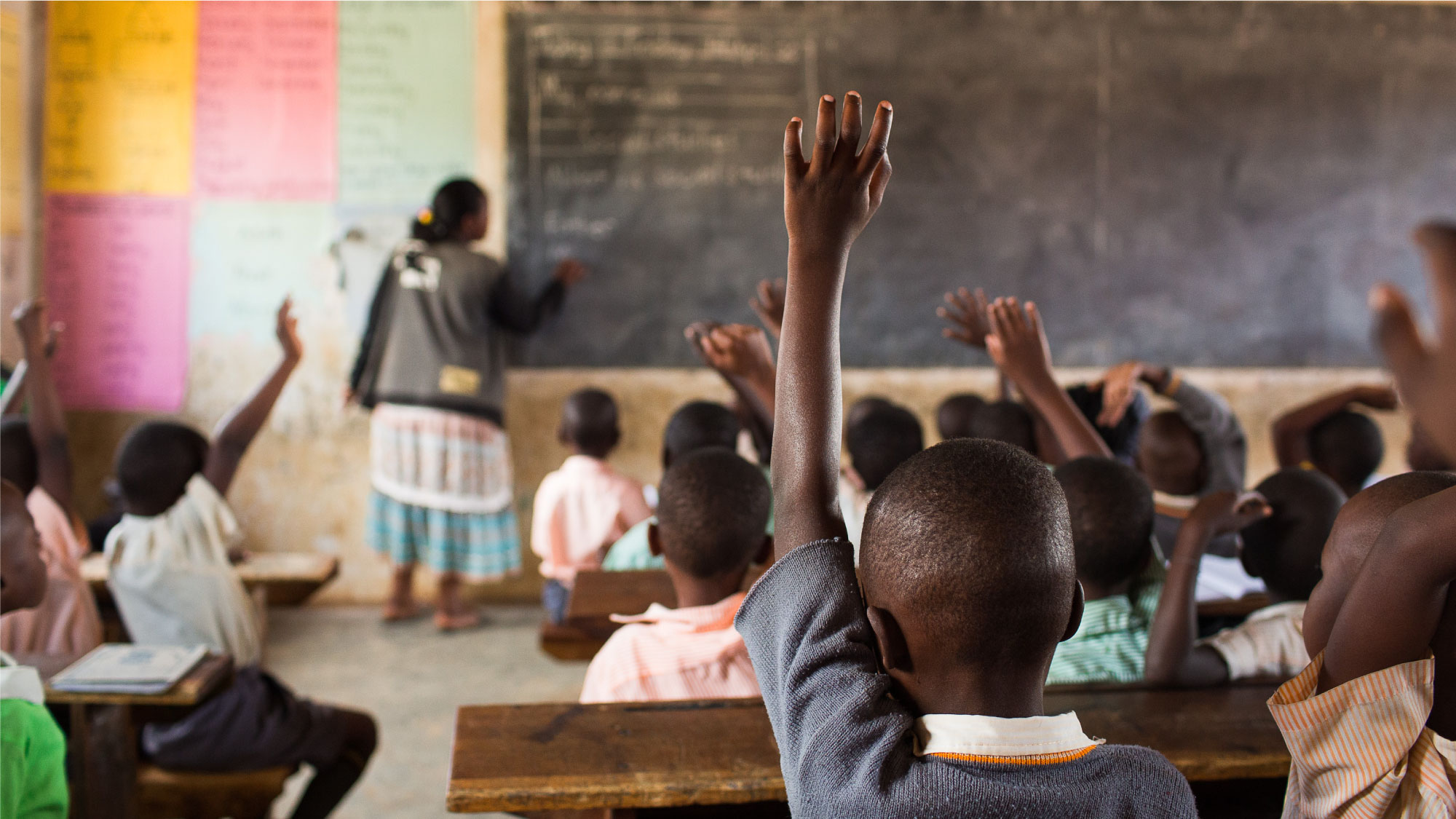 Climate change is at the heart of our team’s work on the Foreign, Commonwealth and Development Office’s Sustainable Urban Economic Development Programme. In this series of blogs, shared throughout COP26, the team gives insights into their work on supporting Kenya’s climate change mitigation, adaptation and resilience.

This blog highlights the work the team his been doing to incorporate the voices of young people into the long-term development of their municipalities, giving them an opportunity to prioritise the effects of climate change.

The UN estimates that young people aged between the ages of 15-24 account for one-sixth of the global population – some 1.2 billion individuals. They have the largest potential to be the catalyst for change and in this current generation – ‘Generation Z’ – there has never been a group of people who are more aware of climate change and its potential to directly influence them.

For some of these young people in Sub-Saharan Africa, they already live with the realities and effects of climate change in their daily lives. In Kenya, 75% of its population is under 35 yet, culturally, decision-making remains the preserve of the older generations. Young people are seldom involved in critical planning processes, resulting in a lack of prioritisation of their needs and missed opportunities to integrate their aspirations in the broader planning of the nation.

In Kenya’s Mandera and Isiolo municipalities, the youth are on the frontline of the negative climate events that the two municipalities are susceptible to – extreme droughts in the dry season and flooding in the rainy season, exacerbated by poor urban drainage. These young people have historically lacked access to information, training and finance, leaving them unable to adapt to climate change and disproportionately at risk during climate extremes.

The youth are further shortchanged when it comes to economic activities, with a significant number not appropriately compensated for their work. A majority of young people in Mandera and Isiolo work in blue-collar jobs where compensation rates are not standardised. and the lack of technical tertiary institutions to provide training opportunities limits their ability to train for white-collar jobs. . This is all exacerbated by the adverse climate events that reduce the productivity of economic activities such as farming, which in turn increases the unemployment rate. In these two counties, climate change induced hazards – such as drought causing lack of pasture and water – are the largest threat to young people’s livelihoods. It also deters youth-led investment into agro-pastoralism, leading to climate induced rural-urban migration in search of job opportunities. The lack of economic opportunities also increases the risk of the youth being radicalised and turning to extremism, driven by clan-based conflict over natural resources, when extreme events destabilise food and water supplies and increase competition for basic resources in largely pastoralist communities.

Urban resilience is critical to sustainable development. By understanding the current trends and putting in place remedial actions countries can protect their environment and safeguard them for future generations. As SUED was developing the Urban Economic Plans (UEPs) for Mandera and Isiolo, we incorporated indigenous knowledge on climate change from the communities, such as Isiolo’s Dedha grazing system, with the aim of strengthening customary natural resource management institutions and empowering the community response to the climate risks the face. For example, it was critical to know the capacity of the pastoral community to withstand the impacts of climate change and disasters in both Isiolo and Mandera. One of the noted ways the communities deal with drought is through improved governance of the rangelands, reviewing rules of access and control during periods of drought, to reduce pressure on pasture and reduce conflict. Further information on the losses associated with natural events helped position the municipalities to develop a municipality-specific economic vision that would facilitate more public and private sector investment in urban resilience.

The SUED team held a series of conversations with the residents in the Isiolo and Mandera municipalities to learn more about the climate change and related socio-economic impacts that they experienced. SUED was keen to integrate the young people in these municipalities in the UEP development process to position them to engage in future climate proofing and helping to ensure that proposed solutions resonated with the young residents. The discussions helped our team design a climate risk assessment within development decisions while integrating social inclusion of often marginalised groups, including women and People Living with Disabilities (PLwD).

Below are some of the ways SUED incorporated the voices of the youth into the programme:

Integrated stakeholder management: Before starting the UEP development process, our team wanted to invest in steering conversations on urban resilience from previous development trends of recovery and reconstruction post-disaster. We needed fresh ideas and who better to reach out to than the youth in the supported municipalities, who were disproportionately impacted by the disasters and the effects of climate change. The programme ensured that all its stakeholder workshops included young people who represented the voices of the future and were not afraid of sharing dissenting opinions. SUED continued to emphasise the need to have conversations on smart-climate solutions which were openly embraced by the more youthful attendees.

Climate change awareness: SUED embedded support information within UEPs on the impacts of climate change that the municipalities were experiencing, and shared case studies from across the globe on how other countries were adapting to climate change in their regions. For example, in Mandera’s UEP development, the programme shared lessons from Mozambique on how women and the youth were engaged in within the value chain with emphasis on the need for the youth to gain information on conservation efforts to increase agricultural production. By having examples that the youth in Mandera could easily reference, the programme was able to glean from them what they would like see replicated in their county to increase their economic base. The UEP development process also sought to empower the youth to build skills to help them identify climate change exposure and sensitivity and link project activities to the context of climate vulnerability. This included looking at their unique socioeconomic conditions and geographical location and reflecting on how they could enhance climate resilience.

Integrating climate finance in its support: In Isiolo and Mandera the programme identified the need for climate smart urban infrastructure development that would need significant investment. Through its technical assistance, the programme has helped the youth see how to position themselves to work closely with the county and municipal leadership to benefit from investment in resilience-increasing activities. The youth within the two counties now better understand why there is need to prioritise climate-adaptive urban infrastructure investments and can advocate for them to their county leadership.

Building local government capacity: Within its support, SUED provides technical assistance through trainings, mentorship and on-the-job trainings to build the capacity of local government officials to better position them to take advantage of private investment in urban resilience. The municipal boards in the supported municipalities now comprise youth representatives who have increased their knowledge of climate mitigation and adaptation methods to combat climate change in their localities. As they better understand why its important to prioritise climate change, they are equipped to make regulatory change that advocates for the institutionalisation of urban resilience best practices. For example, in Isiolo with SUED support the county and municipal leadership have a clear implementation plan on how to better manage their urban drainage system which will greatly reduce the economic impact of adverse climate events. The youth who serve in these boards are learning how to integrate climate conversations within their urban development practices.

Development of climate-resilient infrastructure value chain and infrastructure projects: The UEP development process identified critical value chain and infrastructure projects that will help the municipalities become climate resilient. Young people participated in developing the frameworks for these projects, participating in the provision of critical information to determine the viability of economic interventions. By highlighting the projects that the youth felt would have significant impact in their municipality, they were able to advocate for the development of projects that resonated the most with them. In both Isiolo and Mandera the projects identified are aimed at strengthening the resilience of the municipalities to climate change.

SUED has created a platform through which the youth are included in the decisions about both the development and implementation of urban resilience leaning projects.

This has reduced the risk that the activities designed to increase resilience will have unintended consequences on the youth or further exacerbate their vulnerabilities and inequalities. In doing so, SUED is supporting inclusive discussions that address the under-lying socio-economic drivers of vulnerability such as marginalisation and the impact it has in how the municipalities manage the disruption from extreme climate vents helping them to develop local-based solutions to help them adapt to climate change.